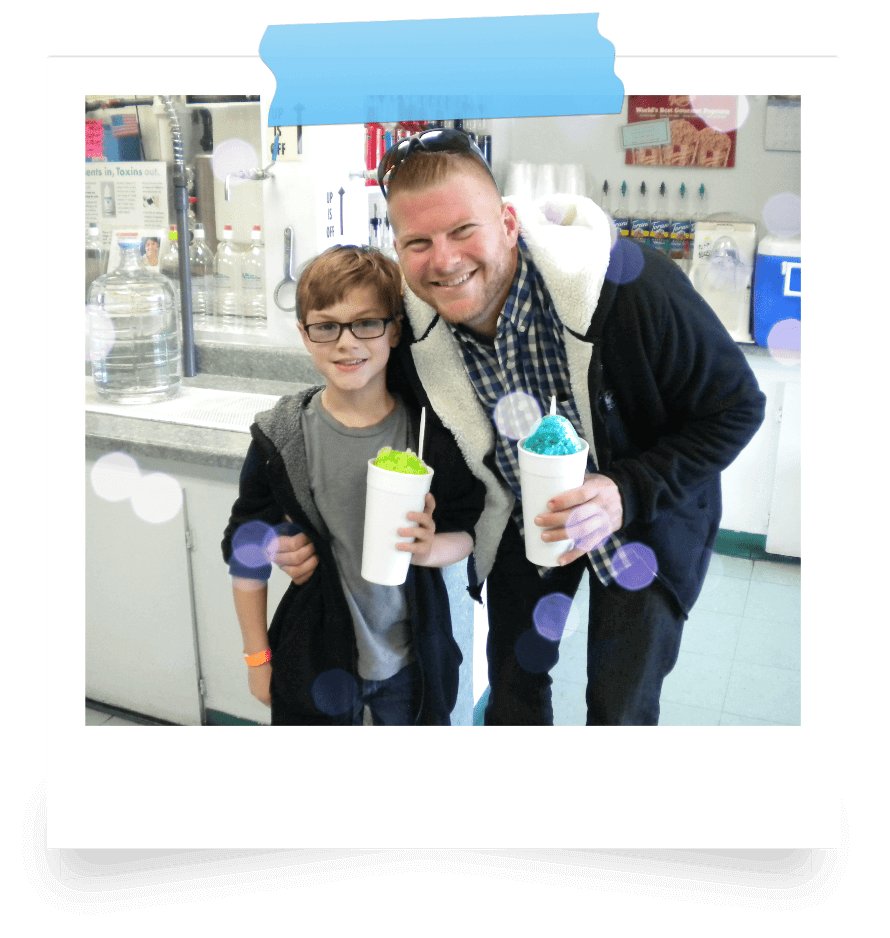 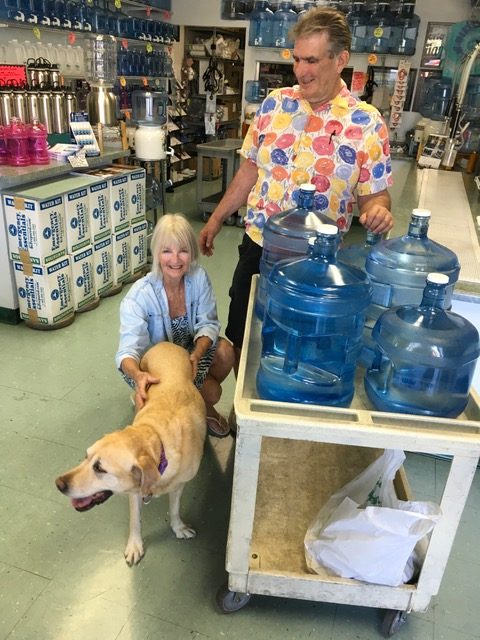 Years ago, an employee of a well known health market told me he traveled from Glendale on a bus dragging with him as many empty bottles as he could handle to the absolute best water store in the Valley.  That “ace” store happens to be the “Water Connection” run by Denise who has the absolute best quality of water in town.  This water is enhanced with ozone and ultra violet light to not only ensure the highest quality, but the taste is clean, refreshing and makes you feel healthy.
The distance we travel is 20 miles round trip but over the years we’ve talked with other customers who travel from as far as Gilbert, Cave Creek to Litchfield Park and Tonopah. Best part of our visit is seeing Denise and her staff ~ all so cheerful and very knowledgeable about water and the many water-related products available in the store.
Judy S. 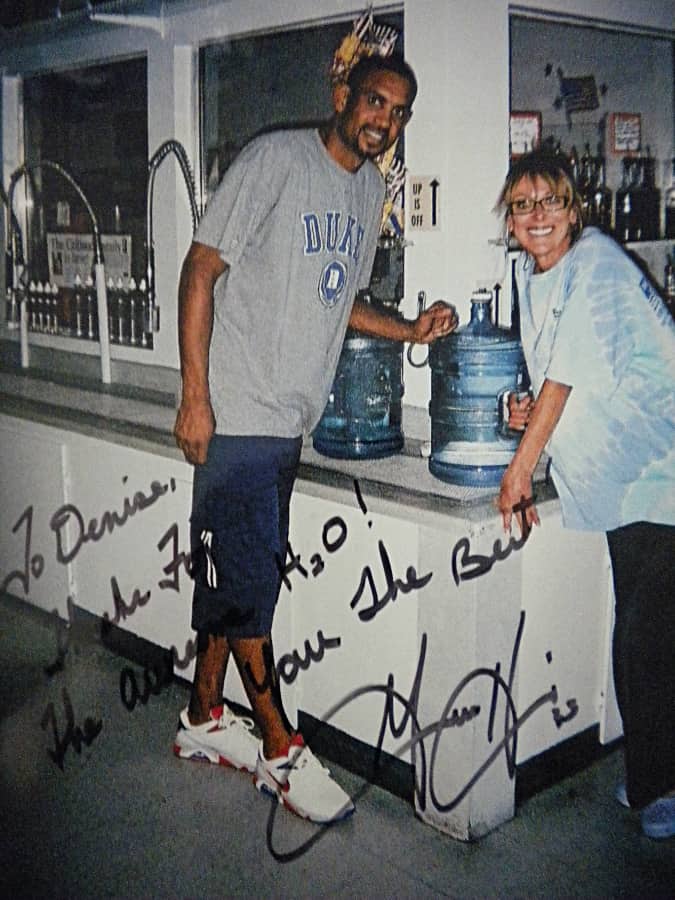 NBA All-Star, Grant Hill, comes to Water Connection and fills his own bottles. We always enjoyed serving Sandra Day O’Connor, first woman to the Supreme Court of the United States of America. 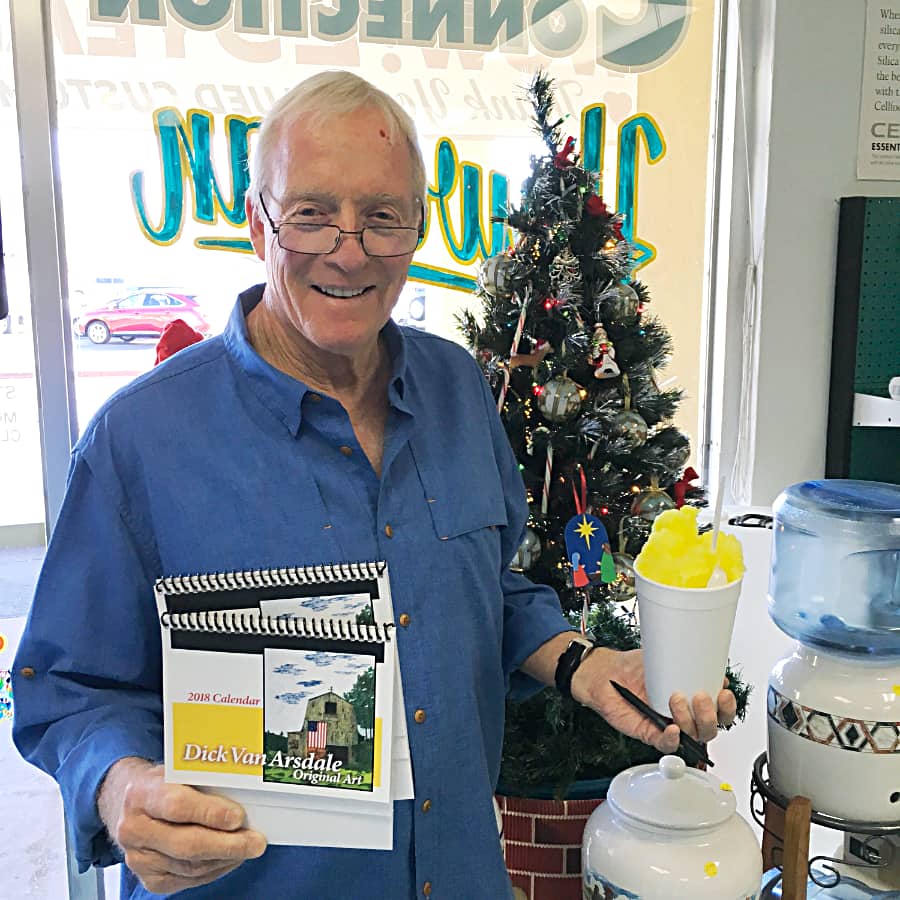 Water Connection has the best tasting water and Hawaiian Shaved Ice in AZ!! I also purchased a water cooler, bottles & other drinking water related items. It is family owned and they make you feel like family right when you are first greeted at the door (especially by Daisy). I live in Avondale AZ have been a customer since 1999 (Before Y2K) I really bought alot of water back then!! A few years later my mom (who lives in Peoria) asked me to pick her up on the way to get water. She loves the great tasting water and her friends says “It’s refreshing”. Once a month I travel 110 miles roundtrip (my husband & I call it the 3 hr tour) but I don’t mind the Quality time spent with my mom and Great tasting water, Ice, and Hawaiian shaved Ice. Thank you Denise, Daisy and Staff for your Excellent Customer Service! Love Lydia and family, (mom Sally too)
Lydia 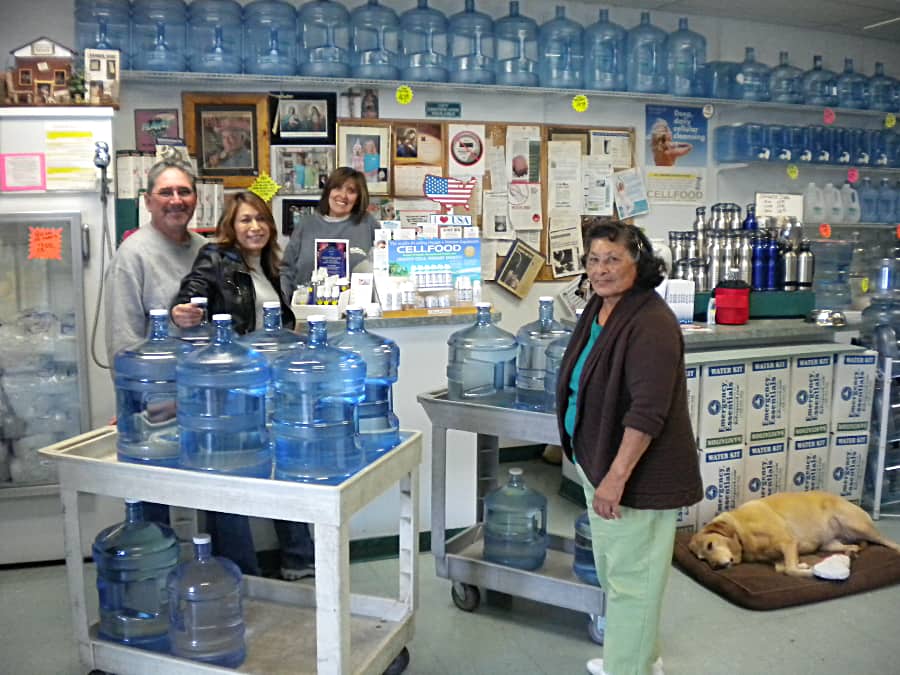 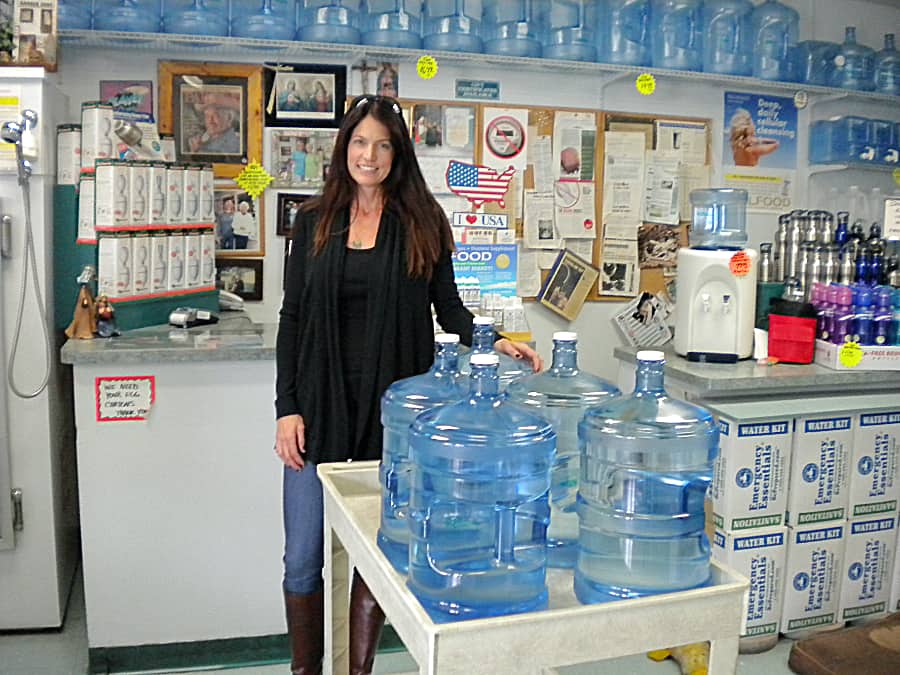 I love Water Connection water!!  I’ve been a loyal customer for years and did a test with my brother-in-law, who is bringing clean water to those impoverished in South America. We tested the water with a TDS meter.  (Total Dissolved Solids). We tested tap water, Arrowhead, Smart water and Water Connection water.  Tap water from Paradise Valley ranged in 320-350. (Yuck!!!)  Arrowhead was in the 50’s, Smart water 20’s and Water Connection water was less than 8.  It was amazing!! My brother-in-law said “no brainier”, buy your water here. I love the fact that I’m providing clean, great tasting water for my children and family.  Also, supporting a small, local business.  Denise and her staff are always friendly and helpful.  An added bonus is seeing Daisy the sweet dog!! You will not be sorry you gave Water Connection your water business.  Cheers!
Gena K. 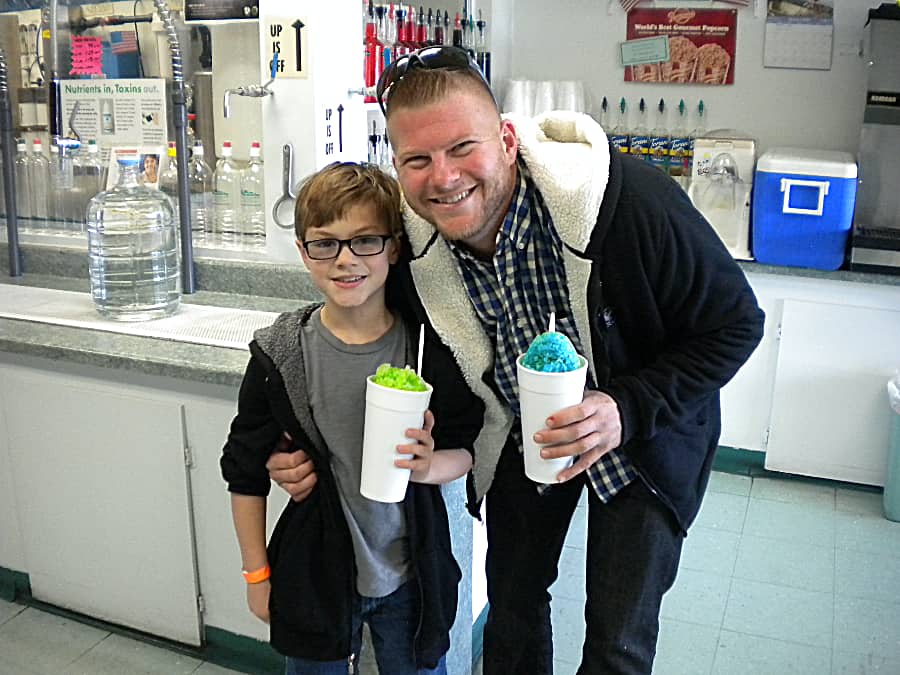 The Water Connection is a hidden gem for Snow Cones in the Arcadia area of Phoenix! My son and I always look forward to getting a delicious refreshing snow cone from the friendly staff at Water Connection.  They have tons of flavors, including sugar free flavors. They also have sour spray that you can have sprayed on your snow cone to make it sour! I suggest starting with 3 sprays of sour.  My favorite is 1/2 Sour Apple and 1/2 Blue Raspberry snow cone. My son loves all Sour Apple. Enjoy!
Nick and Josiah Mote
Denise, Your awesome water keeps us coming back…It's worth all 27 miles from Gilbert!
Aftan 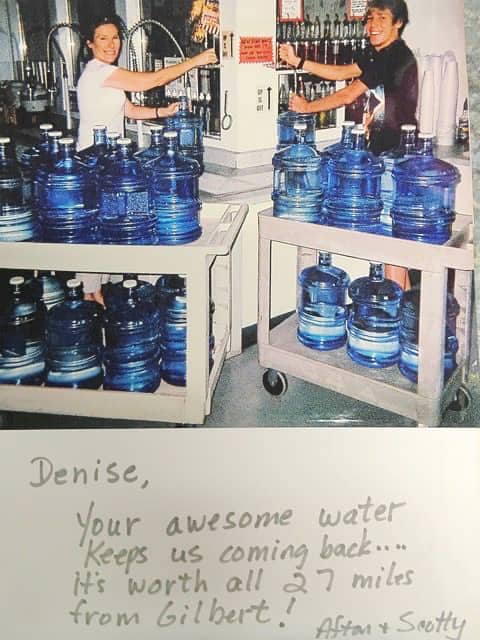 It was great seeing you last week while I was in AZ! I am a huge fan of Water Connection, and I wish we had a location here in Orange County, CA. Every week I fill up a 5 gallon container, and it costs me $15.00 at Pristine Hydro Development in Laguna Woods, CA. Water Connection is definitely a great value!! Your store also offers excellent products. I am a BIG fan of the Cell Food Oxygenating Skin Care Oxygen Gel. I’ve used it for a week now, and my face no longer has dry patches, and my complexion looks more youthful. I have also been enjoying adding the Ionic Trace Minerals to my water to improve my overall health. Thank you so much for all your insight and help! I look forward to stopping by your store next time I am in Phoenix!  Best, Krista Sick
Krista Sick
We have been getting our water at the Water Connection for more than 10 years. Phoenix water is no longer part of our life. There water is great and the staff is wonderful. We enjoy going there not just for water but for the good service and caring way the staff treats it’s customers. If you need water, ice or bottles you can’t beat The Water Connection. Give it a try.
GHI
Water Connections is a fun and practical place to go to fill your water needs. Denise is very friendly and will work with you to make sure all of your drinking-water desires and fantasies are met with good and fresh tasting water. There are bottles of all kinds and shapes, ice bags in different sizes, snow cones in all different flavors and anything else you might want to slake your thirst. And just in case Denise slips up, her sweet dog Daisy is there to keep her in line. I look forward to the time every week or so that my bottles need refilling and I have an excuse to visit Denise and Daisy.
Donald S. 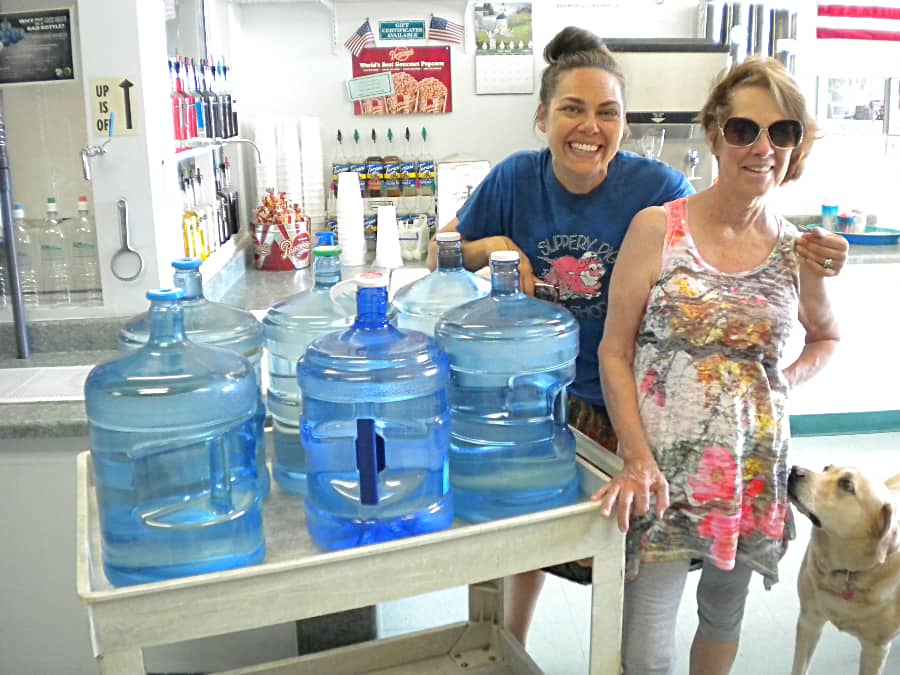 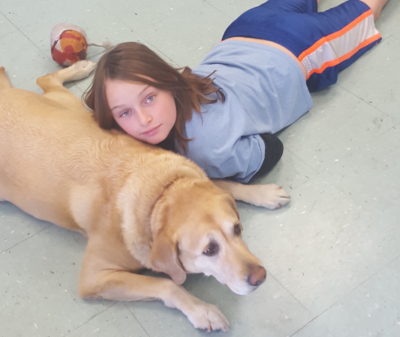 I started drinking Denise’s water at Water Connection back in 2000.
I love her water. It has always been a drive for me, but one worth taking because her shop is clean, her water is delicious, and Denise, along with her staff, are very kind and friendly. Denise has become like family to me.
At one point, my husband was tired of the drive, thinking water is water. He started filling our bottles at a more convenient water shop. It was dirty, had an odor every time we walked in, and the water didn’t taste as good. He realized, just five gallons in, the way he felt, was being affected by the water..
So back to Denise we go. Thank God! To this day, some 16 years later, we are still quite loyal to Denise. It will be a sad day when she does decide to close up shop. Not only because her water is great, but because she knows my family and rare is it a business is kind and genuine to their guests anymore. I pray when it is time to retire, Denise has found a suitable person to “walk in her shoes” and carry on the legacy.
Thank you Denise! Mrs. Clark and Family
Mrs. Clark

Did You Know That Rat Poison Is Added to Phoenix Tap Water?

I have been buying my drinking water from the Water Connection for years due to their superior purity, quality and taste. Knowing what I do about the dangers of ingesting fluoride, I want to avoid fluoride as much as possible. I don’t use fluoridated tootpaste, and gave up green tea a few years ago after discovering that it naturally contains extremely high levels of fluoride. Fluoride is a cumulative poison with toxic effects. The city of Phoenix criminally adds additional fluoride to our drinking water, even though 49 studies have linked fluoride with reduced IQ in children, and there is no increase in tooth decay in communities that have ended water fluoridation. 97% of Western Europe has rejected water fluoridation. Fluoride has been shown to interfere with the thyroid’s uptake of iodine, and it also calcifies the pineal gland. These are just a few of the negative health effects of fluoride, which is a neurotoxin and is used as a pesticide and to kill rodents!!

My research showed that it was very difficult to remove 100% of all fluoride from water. As I learned more I became curious about how much fluoride was removed by The Water Connection’s purification process. So in Jan 2014 I decided to have a sample of The Water Connection purified water, and a sample of water out of my house tap in North Phoenix tested for fluoride content by an independent environmental testing laboratory in Indiana. Both samples were drawn on the same date and time.

As reference points, the amount of fluoride naturally occurring in most surface water is 0.1 ppm. Ground water has higher naturally occurring levels of fluoride. The City of Phoenix’s policy in 2014, according to their annual water report, was to raise the fluoride level of their treated water to between 0.3 – 0.8 ppm. Some days the Phoenix fluoride level could be much higher than the day I tested.

My test results showed that The Water Connection purification process reduced the level of fluoride in its purified water to a level below what is naturally occuring in most surface water. Keep up the great work Denise and the The Water Connection! We rely on you for our health.